CORBA stands for Common Object Request Broker Architecture. The original idea was to create a single universal standard for how objects across different platforms, programming languages, network protocols can communicate with each other in a seamless manner. For example, an application developed on say a Sun Workstation running Unix under the programming language C needs to communicate by virtue of some well defined standard interface (the accepted contract) to a Intel based PC running Windows-2000 developed under Pascal. Without such a standard both sides need to negotiate all the details including the transport protocols.

The CORBA standard defines general interface standards that can be supported by different programming languages. In addition it also defines the quality and robustness of the communication, error handling, and recovery. The Standard does not cover implementation details, but only specifies the general interface language (IDL) used across all supported languages, exception handling specification, a special transport protocol called IOP that sits on top of TCP/IP, as well as the specific programming language mappings. Using the IDL, an implementation for the specific platform dependent object is generated which can be compiled using the supported language.

This book describes the implementation of a simple CORBA object using PolyORB and Ada. While the functionality is very simple the design itself is more extensive using modules, PolyORB’s logging facility and meta classes giving you a better view of what is really needed in a client/server application.

This book covers the Ada 2005 standard. If you are a beginner you will learn the latest standard — if you are a seasoned Ada user you can see what’s new.

Even though the book is still a work in progress, and there may be incomplete or missing chapters, with over 200 pages, it is the largest and most complete programming related Wikibook in the collection.

This book highlights some key features of the Ada language, with coded examples, that are essential for getting started as an Ada programmer. It emphasizes syntax, control structures, subprogram rules, and how-to coding issues rather than design issues.

Ada Distilled is for experienced programmers new to Ada. Heavily commented example programs help experienced programmer experiment with Ada. This is not a comprehensive book on the entire Ada language. In particular, it says very little about Ada Finalization, Storage Pool Management, Representation Specifications, Concurrency, and other more advanced topics. 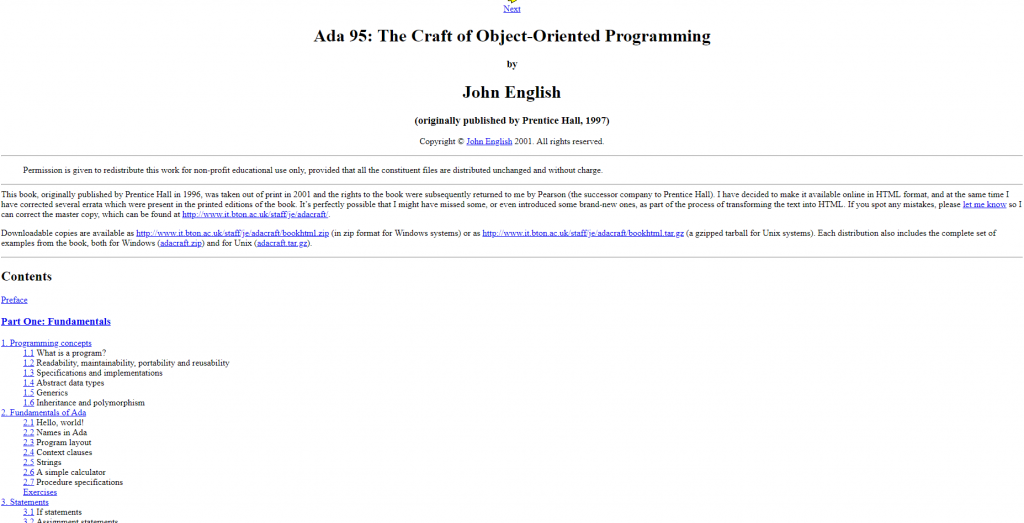 This book is a beginner’s introduction to Ada 95. It uses an example-driven approach that gradually develops small programs into large case-study type programs. The focus of this book is on using object-oriented approaches to write maintainable, extensive programs. Important and unique ADA features such as exception handling, user-defined types, procedures, functions, and packages are covered early in the text.

This Ada 95 Reference Manual is essentially identical to the new International Standard ISO/IEC 8652:1995(E) for the Ada programming language. The thorough technical revisions and extensions documented in this manual are built on broad participation from the international Ada community and generous support by leading institutions. Over 750 submitted revision requests were evaluated, and the resulting enhancements make Ada 95 an outstanding language. The flexibility of languages such as C++, modern features such as object orientation, and improved interfacing capabilities have been added to the reliable software engineering capabilities provided and proven for over a decade by the predecessor version Ada 83; furthermore, upward compatibility from Ada 83 to Ada 95 has been achieved. 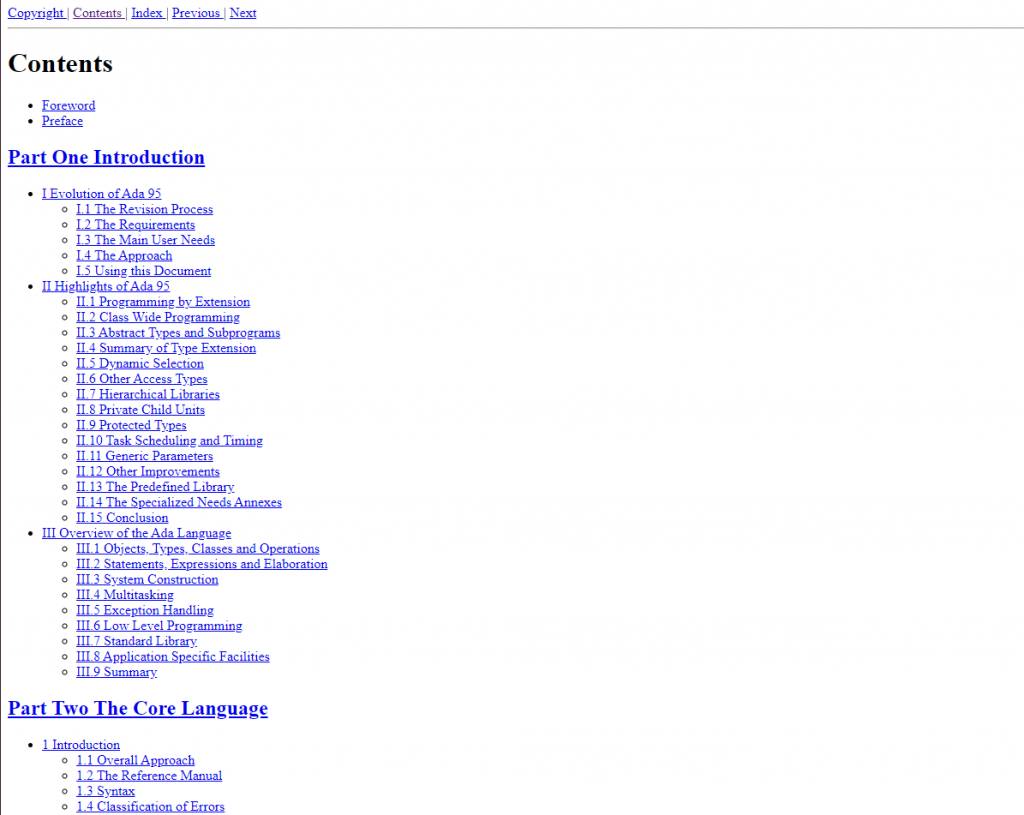 Ada is a programming language of special value in the development of large programs which must work reliably. This applies to most defense applications (from which background Ada evolved) and extends to many application domains. Indeed over half the Ada programs now being developed are for non-defense applications.
This document describes the rationale for Ada 95, the revised International Standard. Ada 95 increases the flexibility of Ada thus making it applicable to wider domains but retains the inherent reliability for which Ada has become noted. Important aspects of Ada 95 include