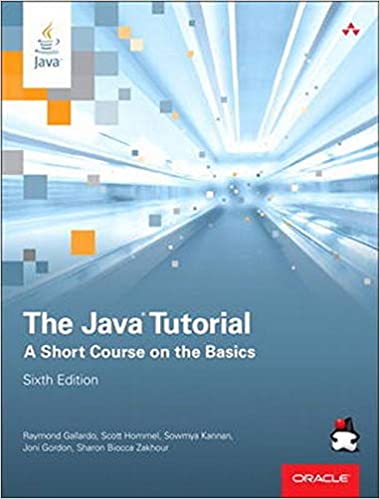 The Java Tutorial, Sixth Edition, is based on Java Platform, Standard Edition (Java SE) 8. This revised and updated edition introduces the new features added to the platform, including lambda expressions, default methods, aggregate operations, and more. An accessible and practical guide for programmers of any level, this book focuses on how to use the rich environment provided by Java to build applications, applets, and components.

Expanded coverage includes a chapter on the Date-Time API and a new chapter on annotations, with sections on type annotations and pluggable type systems as well as repeating annotations.

If you plan to take one of the Java SE 8 certification exams, this book can help. A special appendix, “Preparing for Java Programming Language Certification,” details the items covered on the available exams. Check online for updates.

END_OF_DOCUMENT_TOKEN_TO_BE_REPLACED 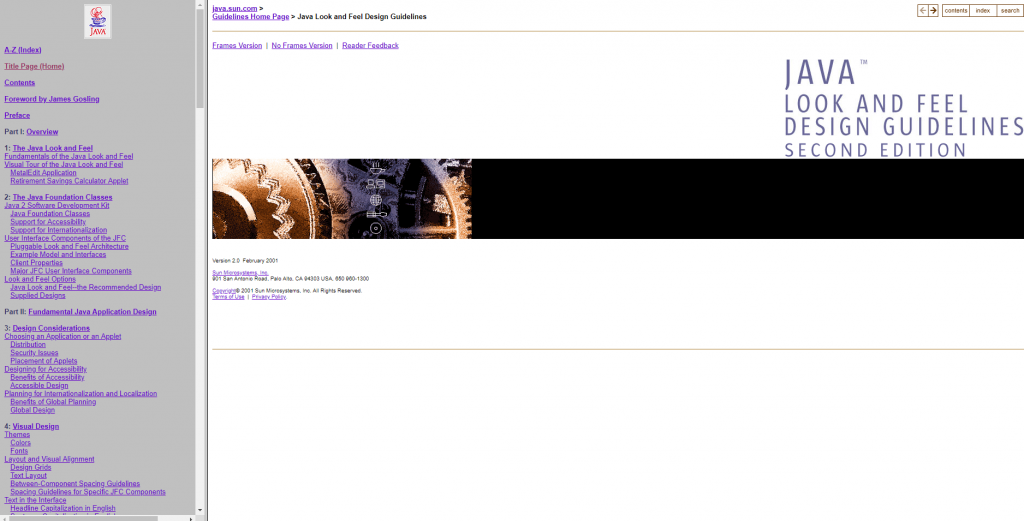 Java Look and Feel Design Guidelines, second edition, provides essential information for anyone involved in creating cross-platform GUI (graphical user interface) applications and applets in the JavaTM programming language. In particular, this book offers design guidelines for software that uses the Swing classes together with the Java look and feel.

This revised and expanded edition contains a collection of toolbar graphics, lists of terms localized for European and Asian languages, and an appendix on look and feel switching. New and revised guidelines are provided throughout, and new sections discuss smooth interaction, the use of badges in button graphics, and revised standards for window titles.

Although an application’s human interface designer and software developer might well be the same person, the two jobs involve different tasks and require different skills and tools. Primarily, this book addresses the designer who chooses the interface elements, lays them out in a set of components, and designs the user interaction model for an application. (Unless specified otherwise, this book uses “application” to refer to both applets and applications.) This book should also prove useful for developers, technical writers, graphic artists, production and marketing specialists, and testers who participate in the creation of Java applications and applets.

Java Look and Feel Design Guidelines focuses on design issues and human-computer interaction in the context of the Java look and feel. It also attempts to provide a common vocabulary for designers, developers, and other professionals.

The guidelines provided in this book are appropriate for GUI applications and applets that run on personal computers and network computers. They do not address the needs of software that runs on consumer electronic devices.

END_OF_DOCUMENT_TOKEN_TO_BE_REPLACED

Creating a Java program is a bit like making a movie or putting on a play. Every theatrical production needs actors (in Java these are objects), roles the actors play (classes), and scenes the actors play out (methods). In a movie or play, actors step into one of their scenes when given a cue; in a Java program, objects enter one of their methods when cued to do so by another object. The Java interpreter, which runs each Java program, is like a combination stage manager and producer—it creates the set, casts the actors, and teaches them their roles. We, as Java programmers, are like playwrights (or screenwriters) and directors put together, we specify the roles the actors will play. Our program’s users are the audience.

Just as a stage manager and a producer read a play or movie script to find out what sets to create and what kinds of actors to audition, the Java interpreter reads each of the classes that we as programmers write to find out how objects of that class must behave (their role). Unlike temperamental actors, however, each Java object does exactly as its class tells it, so each object is the personification of a single role.

Real actors can play many roles; Java objects are all role. A play’s script usually specifies the actions of many characters in lots of different roles: butlers, tycoons, girl scouts, lone gunmen. A Java class, however, only specifies the actions of one quite specific type of character; that is, one role. So a simple Java program might be the equivalent of an extremely boring play about a butler forever polishing silverware, or a snoozer about a tennis pro playing exactly one round of a game of tennis. A complex program, however, might describe a universe of thousands of roles for its objects to play, all working together to run a sophisticated game, a nuclear power station, a national telephone service, or an orbital telescope.

END_OF_DOCUMENT_TOKEN_TO_BE_REPLACED

A CodeGear Developer Network membership is needed in order to download the .zip file. Registration is free.

The authors conclude by demonstrating how a hierarchy of budgets can be created, tracked, and shared with Concurrent Versions System (CVS).

A companion Website includes all source code and a link to each tool described.

Java Application Development on Linux can propel you from a standing start to the full-speed development and deployment of Java applications on Linux.

But, to use the Commons libraries effectively, you need far more guidance than the official documentation offers. In Apache Jakarta Commons: Reusable Java Components, Will Iverson covers what Java developers need to know to take full advantage of Jakarta Commons—starting right now.

Iverson begins with a definitive overview of the Commons project: goals, installation, and getting started with Commons components. Next, he presents example-rich chapters on the twelve most useful Commons packages, covering topics ranging from HTTP FileUpload to database connectivity. Iverson provides detailed code samples for every component he describes. After you’ve mastered the core Jakarta Commons packages, you’ll constantly rely on this book’s handy seventy-five page quick-reference.

Whether you’re building code for front-end Web applications, client-side software, or back-end servers, learning Jakarta Commons will make you far more efficient. Apache Jakarta Commons is the fastest way to master and get results with Commons.

This book is about programming with J2ME on wireless devices with focus on developing games. It is assumed you have some knowledge and programming experience with J2ME and J2SE.

The book does not go into detail on topics like how to make high level GUI menu but does demonstrate what a game menu might look like. Nor will it explain in detail how to use the Record Management System (RMS), but will go over topics that use RMS such as high score and game settings. As well a knowledge and experience with threading will be an asset before proceeding with game development. The book will go over in detail the new game classes that are now included in the MIDP 2.0.

The book also serves as quick reference for Java programmers who are interested in mobile game development. As well, to provide good introduction for experience game developers who developed games in other languages/platforms and are now interested in using J2ME to develop games.

It is a work in progress and not quite complete as of the time of this posting. 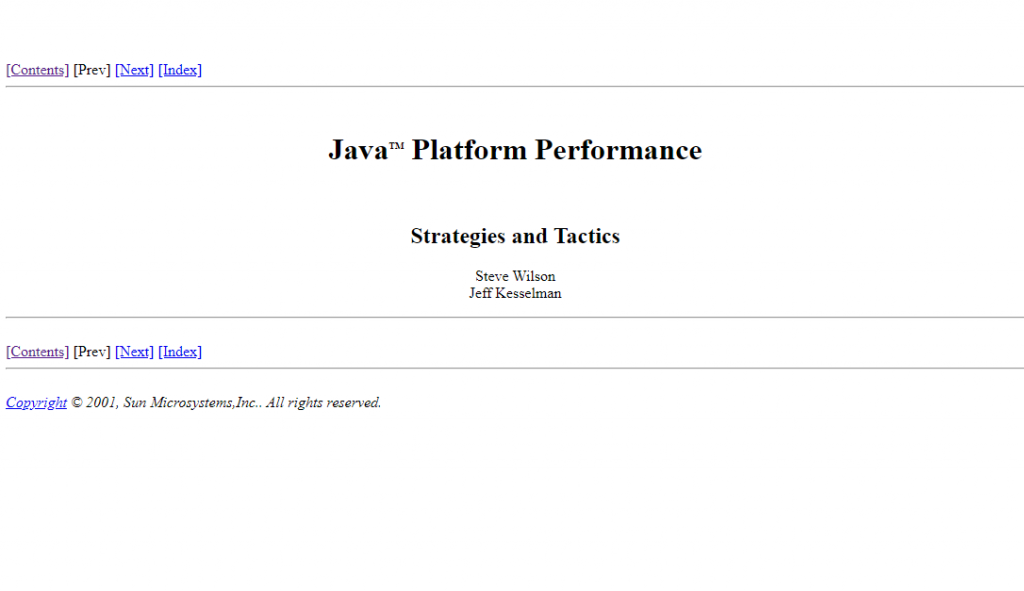 This book covers every aspect of Java performance, including speed, scalability, RAM footprint, startup time, and user-perceived performance factors. Part I covers the crucial process issues associated with Java optimization, outlining how performance tuning fits into the software development process, showing how to use benchmarks and profiling tools to identify hot spots and bottlenecks, and presenting general strategies for enhancing the performance of Java technology-based systems.

END_OF_DOCUMENT_TOKEN_TO_BE_REPLACED

Follow your own path to expertise with this self-guided tour of the Java programming language. Written by two members of the JavaSoft team at Sun Microsystems, the book employs a hands-on interactive approach to teaching Java basics, object-oriented concepts, applet programming, and everything else you need to know to become a proficient Java programmer.

Through a task-oriented, example-driven approach, The Java Tutorial introduces you to fundamental concepts and applications. Designed so that you can customize your own path through the specific information you need, the book explains the nuts and bolts of the language, applet construction, and the fundamental Java classes. You will also learn about more advanced topics such as creating a graphical user interface (GUI), using multiple threads, and working with Java’s networking capabilities.

Since its introduction in 1999, the Java 2 Platform, Enterprise Edition (J2EE) has achieved remarkable success. Over one million developers have downloaded the J2EE SDK and over a dozen application server companies have announced J2EE compatible products.

Following the tradition of the Java Community Process, J2EE in Practice represents the ongoing partnership between the Java software group, J2EE licensees, and their customers. Each case study shows how the J2EE platform was used to solve an existing business problem.

Through code samples and a full e-commerce application example, this book provides concrete guidelines to mastering the J2EE platform.

The J2EE Tutorial, Second Edition, is the complete guide to all major components of the Java 2 Platform, Enterprise Edition (J2EE) version 1.4. Written by members of the J2EE platform team at Sun Microsystems, this is the task-oriented and example-driven book that will have new and intermediate Java programmers building J2EE applications right away.

The first chapters introduce the J2EE 1.4 platform architecture and APIs, the Sun Java System Application Server Platform Edition 8, and the basics of working with XML and Web applications. The greater part of the book is devoted to describing and demonstrating the Java XML, Web-tier, and Enterprise JavaBeans technologies and platform services. Extensive examples and case studies show you how to put these technologies to work in the real world.

This book tells you how to create graphical user interfaces (GUIs) for applications and applets, using the Swing components.

This book describes designing Web services using the current technologies available with the Java 2 Platform, Enterprise Edition. This book and the accompanying Java Adventure Builder Reference application (hereafter referred to as adventure builder) are part of the successful Java BluePrints program created by Sun Microsystems with the introduction of the J2EE platform. Application architects, developers, and students everywhere have used this program to better understand the programming model inherent in the J2EE platform. 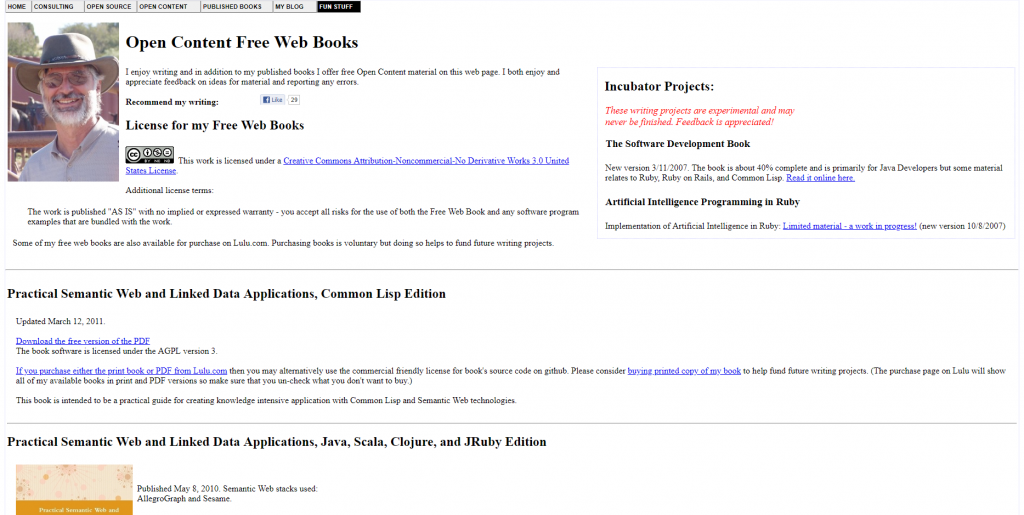 This Open Content book covers AI programming techniques using Java.
The latest version has a completed new chapter on statistical natural language processing and a new section on embedded expert systems, and a new chapter on spam detection.
This is not the original book written for Morgan Kaufman Publishers. This book contains all new material.
Chapters include: